Home / JVC • Reviews / JVC KW-V430BT Review: A Look At Its Features And Specifications 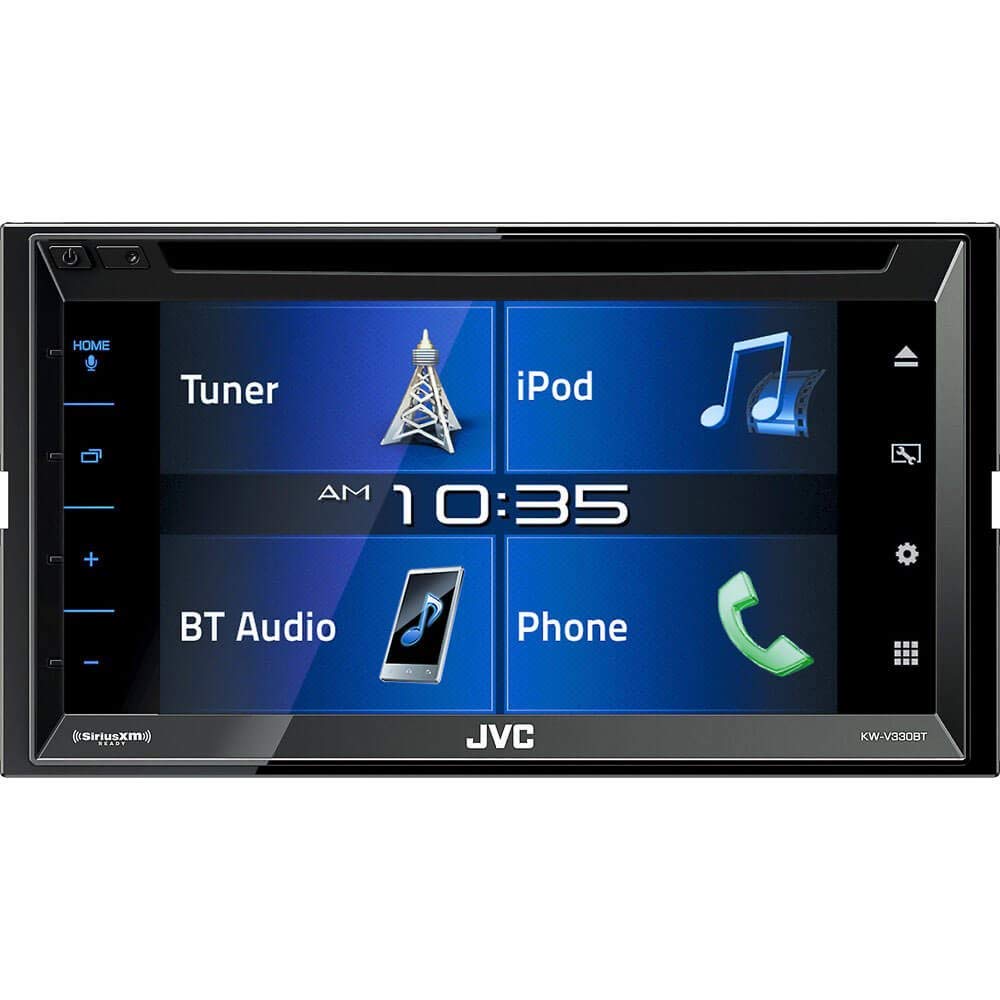 If you want additional features in your vehicle that weren’t included intiallty, upgrading to an aftermarket head unit like this one is an affordable way to improve your vehicle instantly.

While your stock stereo probably does all of the basics like playing AM/FM radio and CDs, you’ve seen stereos that do more. Upgrading to an aftermarket head unit can expand those capabilities to include things like wireless music streaming, satellite radio and in-dash navigation and in-dash control of your mobile phone.

JVC is an industry leader in the manufacturing of car stereo equipment. JVC is a Japanese consumer electronics company and was founded in 1927. It is now known officially as JVCKENWOOD USA Corporation, continues to be an innovative provider of car stereo equipment and as such, the KW-V830BT comes with high expectations.

This JVC KW-V430BT review will help you more clearly understand the included features of this unit and how your needs can potentially be met by upgrading your car stereo system with this head unit.

What is the JVC KW-V430BT? Is it Compatible With My   Vehicle?

The JVC KW-V430BT is a middle-grade, double DIN stereo system meaning that it can only be installed in vehicles with a double DIN stereo opening. Double DIN is simply one of two of the most common standard measurements of car stereo head units.

A double DIN head unit is simply twice as tall as a single, usually featuring a large video display. Single DIN car stereos are typically simpler and are much shorter, only about two inches tall.

The easiest way to see if your car has a double DIN stereo opening would be to google images of the two and you should be able to easily tell. If you feel your eyes are deceiving you, a measuring tape can help you be sure. A double DIN head unit will be about four inches tall.

The JVC KW-430BT is a head unit with Bluetooth technology, a 6.8-inch touch display, and technology to take your in-car entertainment to a new level. Use this JVC KW-430BT review to inform your purchasing decision because we know that choosing a new car stereo head unit can be hard with so many options out there.

The JVC KW-V430BT is, in a lot of ways, the same as some of the most popular double DIN stereo head unit replacement on the market today. But, there are some key features worth pointing out as well as a lack of some features that you should know about.

The JVC KW-430BT has all of the standard capabilities you would expect from a car stereo head unit. The unit has a drive ready to play your favorite CDs and DVDs as well as an AM/FM tuner for your favorite radio stations.

Though the unit is not ready to play HD radio stations, the unit is compatible with a Sirius XM satellite radio tuner. This is a separate component, that can be purchased for as little as $40 online, that allows the JVC KW-V430BT to tune to satellite radio. To use this functionality, however, you will need to pay to subscribe to Sirius XM.

This particular unit is expandable in other ways as well.

The JVC V430BT has rear AV, USB, and camera inputs. Many may consider the USB being in the rear of the unit to be a nuisance, but if you plan ahead, this can actually help keep the cab of your vehicle free from USB cables and overall look neater. The camera input is ready for plug-and-play usability. A backup camera can be an extremely helpful tool, especially for those that drive large vehicles, and the rear input on the JVC V430BT makes installing one a breeze.

For outputs, the V430BT has a rear video output for installing additional displays, and three preamp outputs for giving a little boost to your vehicle’s other amplifiers.

The JVC KW-V430BT offers several features to keep your audio sounding its best in your car.

The head unit has a 13-band equalizer with digital time alignment. Digital time alignment is technology that staggers sound form specific speakers around the cab by a small amount of time so that sound from all corners reaches your ears at the same time. Annie from CarStereoChick.com explained a little bit further about the technology and why it is important to have in a car stereo.

“Basically, when you’re sitting in your car, typically the left speaker is going to hit your ears first. Then the next closest speaker, like the rear driver’s side. Next is usually the front passenger speaker and last is probably the passenger side rear speaker. You might not have realized it up until this point, but the slight delay in when the sound waves actually reach your ears greatly effects your sound stage and your overall listening experience. Digital time alignment allows you to digitally delay the closest speakers so that every speaker reaches your ears at the same time.”

The unit also has K2 technology to improve sound, Sound Lift technology to compensate for low speaker positions and Volume Link EQ technology which boosts specific frequencies that are drowned out by road noise.

Feature to improve audio quality will certainly be appreciated by music junkies, as will the unit’s ability to play lossless audio files. FLAC, high-res audio files can be played via a USB connection on this particular unit.

Visually, the unit has a lot to offer.

The user interface layout is customizable and so is the color scheme. Additionally, button illumination color can be changed.

One fun feature included on the JVC KW-V430BT is what’s called Streaming DJ Mode. This allows you and four of your passengers to all connect simultaneously to the unit via Bluetooth and collectively DJ. This is a great added feature for road trips.

The Bluetooth features on the JVC KW-V430BT are fairly standard and include calling and audio streaming.

Calling over Bluetooth is simple and safe since your hands never have to leave the wheel. The touchscreen display offers access to dialed and received calls, missed calls, and a number-pad dialer to make new calls. Once loaded, you can also access your contacts list for quick calling to those most important to you.

Audio streaming over Bluetooth on this device is more advanced standard Bluetooth audio streaming. JVC has made pairing via Bluetooth simple. All you have to do is plug your phone in to the USB port and your phone will be quickly paired automatically. This is perfect if your vehicle has multiple drivers as you can switch between devices quickly and effortlessly.

Once paired, the JVC KW-V430BT allows you to wirelessly stream audio from your favorite apps though artist and song info will not be displayed on the screen.

There are a few areas where the JVC KW-V430BT is   lacking.

The KW-V430BT is very affordable. Retailing for around Price not available is a low price in the realm of double DIN stereo head units, but the KW-V430BT is arguably not feature-rich. This likely contributes to its low price While the price is very affordable and the unit is capable of carrying out most of the basic functions you’d expect, there are some stark absences of features on this unit.

Reviews of the JVC KW-V430BT are fine – not great. Some users are very pleased with the basic functionality while many recognize the areas this unit could be improved in.

Let’s take a look at some JVC KW-V430BT reviews. Most reviewers echo the same points.

“Adequate, but not really worth installing. Purchased this as a replacement for a factory head unit in a 2007 4Runner. Sounds fine, install was easy with iDataLink Maestro for steering wheel and car ODB control. ODB control ended up only duplicating a couple of engine functions present on the dash but did also show real-time tire pressures and temps. That was the high spot. The low spot was poor Spotify and phone operations. Opted for this as opposed to CarPlay compatible unit since I intended to only use Spotify. There was no real integration – no apparent album/artist lists, etc. So just ended up playing Spotify on the phone through Bluetooth Also, could never figure out how to get the unit to store phone numbers. Just clunky overall with a busy screen interface that needs serious updating. Sent it back…and could not be happier.” 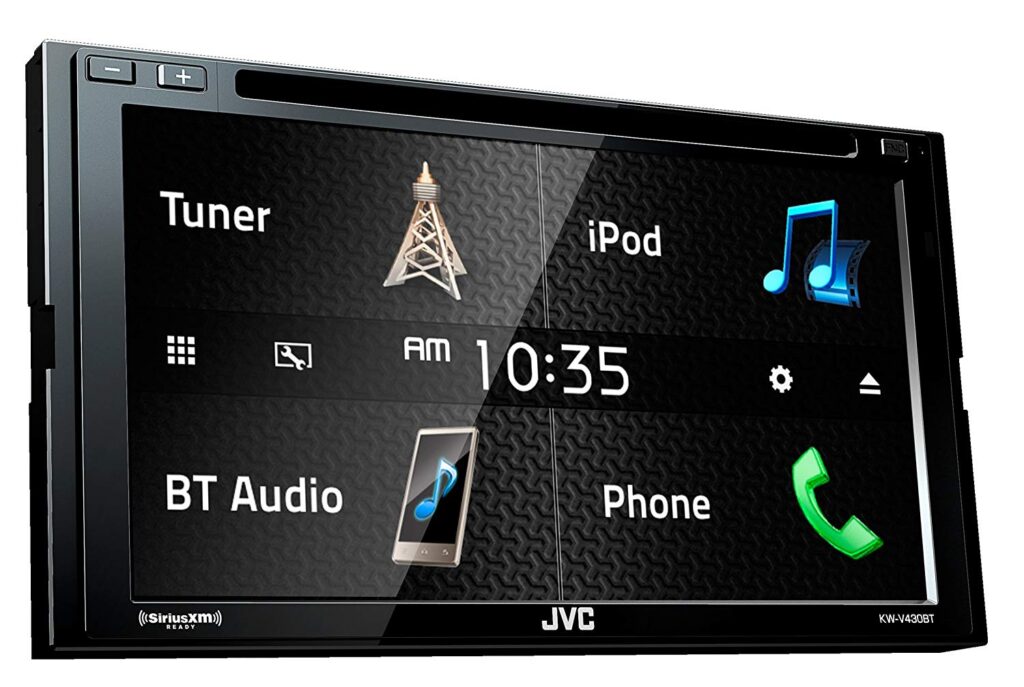 A happier reviewer still noted some issues but said, “Excellent for the price,” overall. “For the price and all the features you can’t beat. It is a bit slow using BT as if the processor was a bit under rated for the unit but does [not] bother me,” he said.

The JVC KW-V430BT has a lot of room for improvement. In terms of features, the KW-V430BT is surpassed even by more affordable units. Take, for example, the Jensen VX7021 which offers built-in included map databases with millions of points of interest, included GPS navigation capabilities for life and more impressive sound quality. The JVC unit has no GPS navigation capabilities or advanced smartphone integration. Additionally, there is nothing extraordinary about any of the technical specifications.

This unit is very basic. There are certainly more feature rich stereo units out there for the same amount of money or potentially even less. The JVC KW-V430BT has been out for a few years now and has been surpassed by newer head units. You can get more bang for your buck by looking at different models of head unit.

Replacing your stereo head unit can add a whole new world of functionality to your vehicle’s stereo system. Choosing a new head unit wisely can make all of the difference. Just because a unit has a certain price tag and is made by a certain manufacturer, does not mean it will provide a luxurious, high-end listening experience. It’s very important to do your research as a consumer.

However, it’s clear from this JVC KW-430BT review, that the unit offers solid, basic functionality for the price range it’s in. For reliable Bluetooth audio streaming, playing CDs or DVDs, and listening to satellite radio, the JVC KW-430BT is worth looking into – or at least a good place to start.