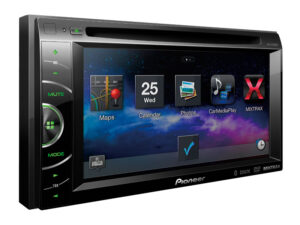 If you want to get an upgraded double DIN unit for your car for less, or you’ve just got an older model car, one of your best choices is to purchase a slightly older double DIN model.

Far from being a cheap or outdated piece, an older model from a reputable company can give you all the same features as a newer bargain double DIN; however, you’ll find that you’re getting a much more reliable model with a better network of support, replacement parts, and upgrades that all come from buying in a well-established company.

In addition, since many succeeding generations of double DIN stereo heads have the same kinds of interface and installation, you’ll find that upgrading to a more cutting-edge stereo head unit is much easier the second time around. Whether it’s an addition to a used car or a purchase for someone who’s on the fence about upgraded car stereos in general, buying a previous generation stereo head in a strong company can actually be the best possible choice.

While it is around two years old now and no longer the cutting edge, Pioneer’s x2600BT is a prime example of a double DIN that, while not the latest and greatest, doesn’t show its age in the slightest. With all the features you’d ever expect on an upgraded car stereo with video capability, the x2600BT is a far better choice than a bargain-basement new model, and the smart choice for upgrading your car stereo without breaking the bank. In fact, we think the value and features included make it one of the top 5 car stereo units to purchase now and highly recommendation amongst the Pioneer units.

[easyazon_image align=”center” height=”500″ identifier=”B00GN5K5WO” locale=”US” src=”http://www.bestdoubledinheadunit.net/wp-content/uploads/2015/05/51a7Yzb80PL1.jpg” tag=”bestdoubled02-20″ width=”500″] Like any good Pioneer head unit, the x2600BT covers everything you’d normally expect in a car stereo. On the radio side, you’ve got your basic AM/FM tuner and the ability to save presets, as well as artist and song info if your station provides it. In the same vein, you’re going to have an 8 band equalizer with presets as well, perfect for the audiophile who knows how they want their favorite stations and songs to sound. If you’ve already got an improved stereo system, the x2600BT will probably work with your existing setup as well. Basically, anything you could do on your stock stereo head, you’ll be able to do with the Pioneer x2600BT without any trouble.

Of course, you’re not buying a better stereo head to get the same benefits as your stock model, so the x2600BT, first and foremost, improves upon all these basics with a much more intuitive control. Instead of a push-button setup, this double DIN stereo head is all touch-screen, making it easy for even the most technologically illiterate driver to figure out.

Instead of trying to remember which multi-purpose button does what on what screen, you’re using a graphic user interface, much like your computer or smartphone, so finding new ways to get a tighter control over your car’s audio is as simple as reading and following clearly labeled menus. With this level of control, even people who just want to use the radio in their cars will have a much easier time getting their sound just the way they want.

If you want to move beyond the basics, however, you’ll find that the x2600BT has a nice array of features that can turn your car into a pretty impressive entertainment system. With a 6.1 inch WVGA screen, you can play DVDs through this model, perfect for keeping everyone entertained on family car trips; once again, the controls are touch-screen based, so any passenger can easily control the player without headache.

Want to play music and movies from your Iphone or Android? Not a problem.The x2600BT has a USB interface cable, allowing you to charge, connect, and control your mobile device right on the stereo head. You’re also getting support for some of your favorite streaming radio services already installed on this model, so fans of Pandora can simply plug up their mobile device and stream right through their car’s stereo.

Other Pioneer Features to Love

But the crowning feature of this model has to be its Bluetooth connectivity, allowing you to link up wirelessly with any Bluetooth ready device in your car and play its media right through the stereo head. From hands-free calling to sharing giant libraries of media hassle-free, the x2600BT’s Bluetooth won’t just give you features, it’ll give you all the options to make your car into exactly what you’ve always wanted it to be.

If you want a great stereo head but can’t justify the expense of the latest and greatest, you’ll find that this Pioneer double DIN car stereo has everything you could possibly want in a slightly more affordable package. With its huge array of features, a wide support network, and Pioneer’s know-how behind it, the x2600BT may not be the newest piece on the block, but it’s certainly not the worst.